Radio interfaces are frequently variable sub-rate interfaces. Path selection is a huge challenge with this sort of handoff, because not only is the available bandwidth less than the speed of the handoff interface, it's a moving target based on RF conditions from moment-to-moment. DLEP provides a flexible framework for communicating link performance and other parameters to the router so that it can make good path selection decisions.

It's obviously handy for point-to-point links, but that's not where it gets really interesting. 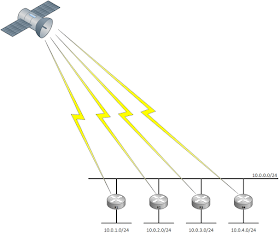 We have four routers sharing a broadcast network (10.0.0.0/24), each with a satellite backup link. Simple stuff, right?

But what if that 10.0.0.0/24 network isn't an Ethernet segment, but was really an ad-hoc mesh of microwave radio modems, and the routers were scattered among various vehicles, drones and robots? 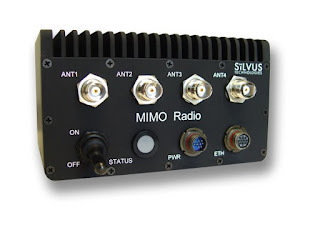 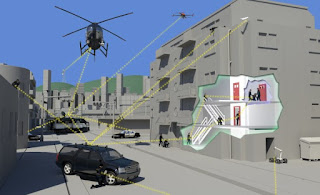 The radios know the topology of the mesh in real time, but the routers plugged into those radios do not.

Wasting microwave bandwidth with BFD packets would be silly because it won't tell you about link quality, nor the number of mesh hops between any two devices.

DLEP solves this problem by allowing each router to learn about reachability of his neighbors (other routers) over the mesh in real time, from the mesh radios.

The Cisco implementation of DLEP in ESR routers works a lot like BFD. Just like BFD, DLEP is a service subscribed to by routing protocols. When DLEP informs the routing protocol about a reachability change, the routing protocol can reconverge immediately on a per neighbor basis. This way, when the lead truck in the convoy (containing R1) crests a hill, other trucks will switch to SATCOM for the 10.0.1.0/24 prefix without waiting for R1's dead timer to expire.

The pictures in this article came from Silvus Technologies because these are the only mesh modems I've played with. Last I talked to them, Silvus didn't support DLEP, but they appear to be working on it.